If you are responsible for a property, it’s very likely that you need to take some fire precautions to keep visitors and the people that use that building safe.

Getting the right fire alarm system in place is one of your key responsibilities, also the law requires employers and or building owners/occupiers to carry out a fire risk assessment under The Regulatory Reform (Fire Safety) Order 2005 (information can be found here).

Fitting a fire alarm system is one of the most, if not the most, important steps you can take to ensure the safety of the people in your building.

While you would think that this should be a straightforward task, building regulations, structural obstacles and sometimes just plain aesthetics make it a complicated task. Thus flexibility of the
system you choose to install is of the utmost. We have listed the common types of fire detection & alarm systems below.

There are a wide range of fire detection and alarm systems from the basic conventional System through to the fully addressable intelligent analogue addressable fire systems. 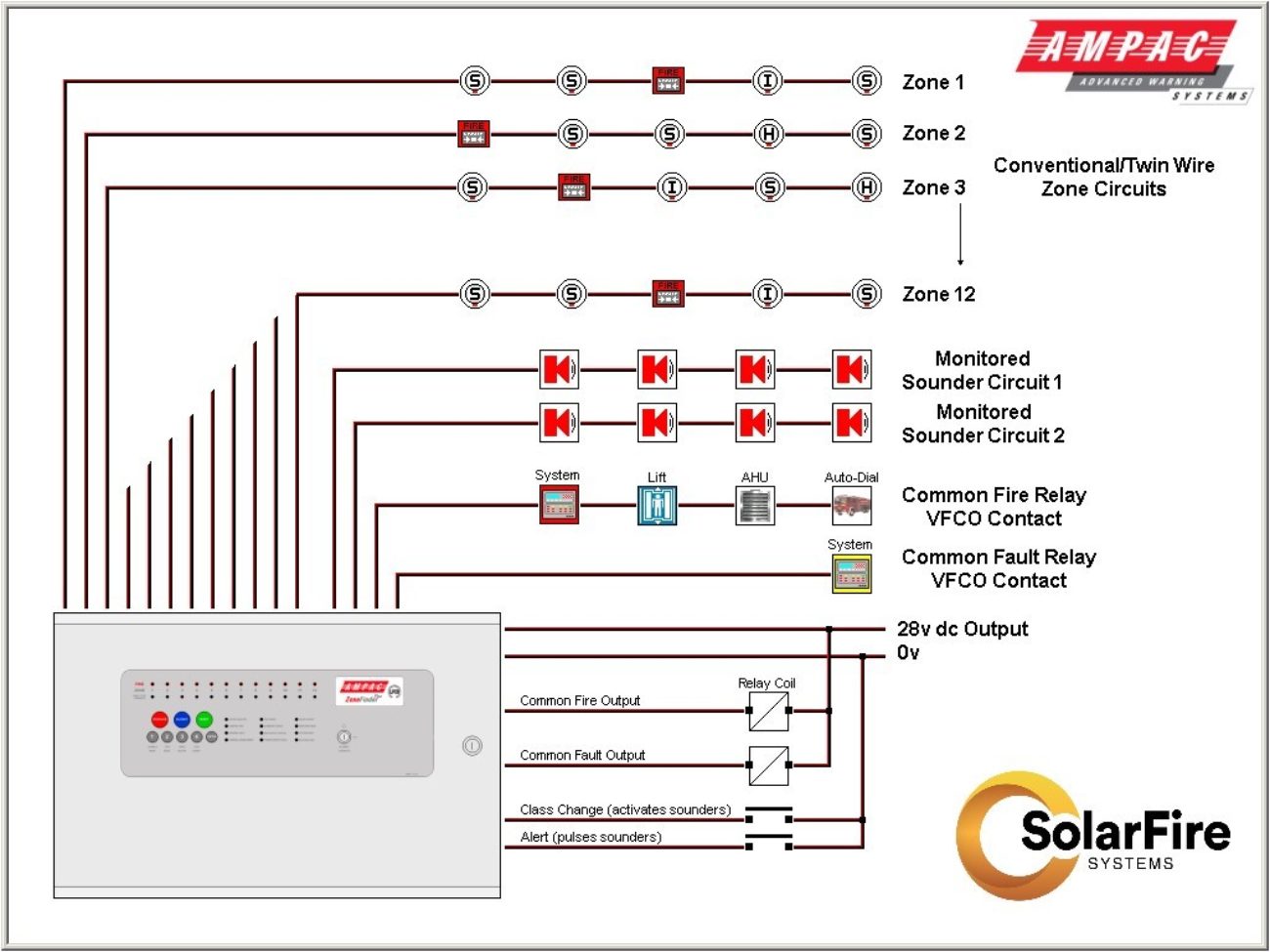 Conventional fire detection and alarm systems have been used extensively for many years in small shops, restaurants, small office buildings, and industrial units.

The systems work by dividing the building into a number of detection zones with detectors and manual call points wired in each zone to a dedicated control panel however, some systems may require multiple detectors in a single zone. Within each zone of detection, there will be either electronic sounder or a bell.

If a detector or manual call point is activated then the control panel will indicate via an LED which zone has the alarm so that area can be searched to locate the activation.

A zone chart of the system should be located next to the panel to indicate the location of the zones. 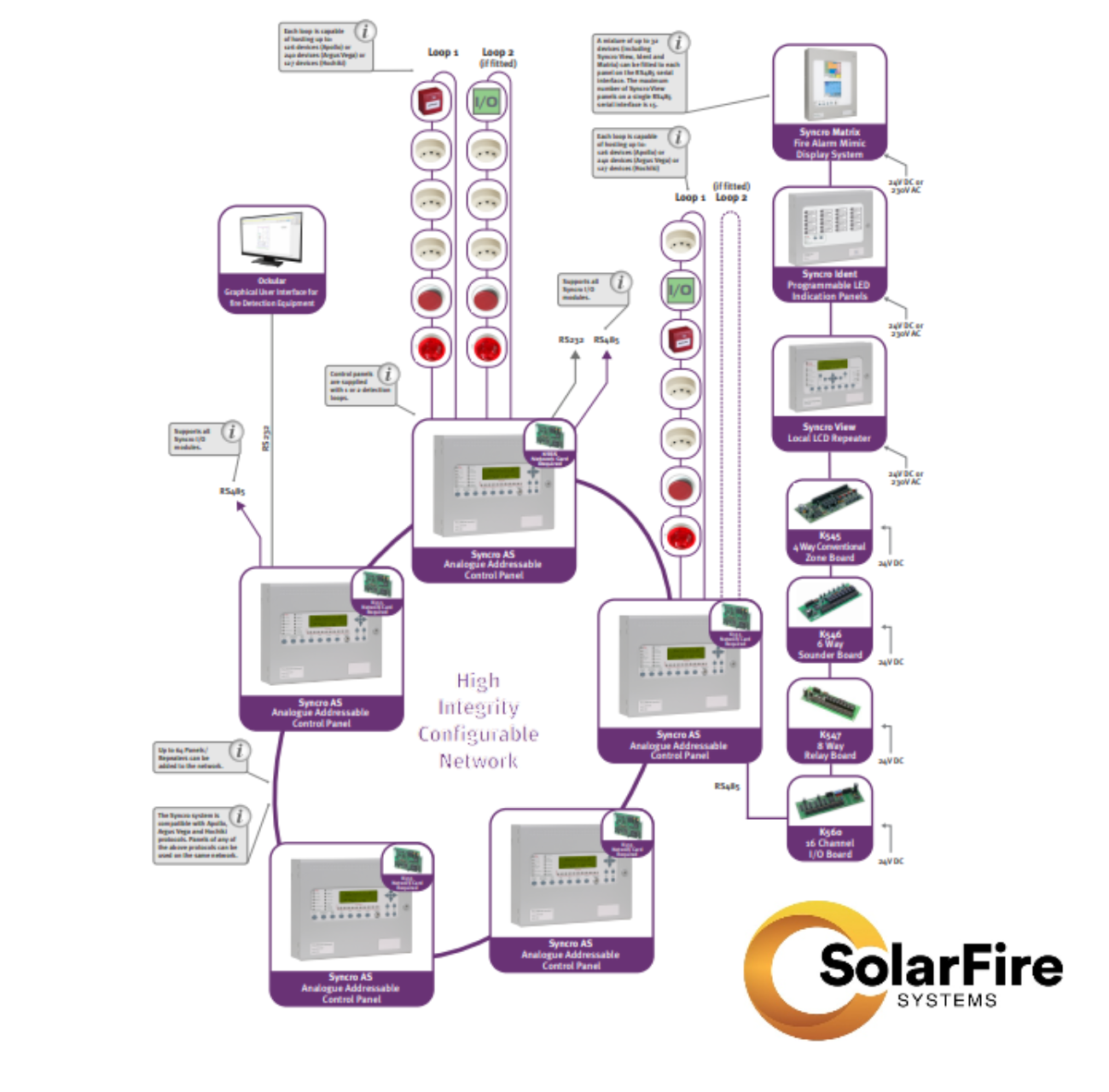 Systems are wired in either one or more loops of detection throughout the premises this means that these systems require less cable in their conventional counterpart. Each detector, manual call point or device on the system has its own unique address similar to that that used in computer networking.

Addressable systems receive health information and status from each device that is on the system and indicates that device's precise location on the Control Panel.

Large network systems can also have a PC controlled graphic system connected to them so a visual representation of the building or campus can be displayed and the location of the incident can be quickly identified.

Modern systems also allow for the fire alarm and detection system to email notifications of either alarms or faults to any number of users via a text message or email.

There are two common types of systems -

Fire alarm systems include a variety of different components, all of which communicate with each other. The language that these devices use to communicate is called a ‘protocol’ – and this is what can be ‘open’ or ‘closed’.

Companies who provide open protocol systems disclose the relevant technical data required for manufacturers to produce compatible devices. These companies can work with any number of different manufacturers, providing customers with a range of different suppliers to choose from.

Companies who produce closed protocol systems don’t disclose their technical information, and therefore customers are forced to acquire all of the relevant components from a single source.

Open protocol fire detection & alarm systems offer customers a greater degree of flexibility, and this is one of their main benefits. As a result, customers can choose from a variety of different suppliers, allowing them to install components which are completely suited to their specific circumstances.

Other factors such as repairs and upgrades can be completed by any trained fire engineer, which allows customers to take advantage of an open market and choose a technician who offers the most value for money or expertise. Another advantage to open protocol is that the co-operation between different companies almost guarantees that a component is well tested and reliable.

There are very few disadvantages to utilising an open protocol fire alarm system but they should be kept in mind prior to making a final decision. As this system allows users to install components from different manufactures there is a slight chance that some of these devices won’t be compatible after a full system upgrade.

Customers can choose from a wide range of engineers when they wish to have their system upgraded or repaired, but this is the basis of another disadvantage. With so much choice available, there is a chance that an untrained or unprofessional engineer will work on the system, which can obviously be risky.

Whereas open protocol systems allow customers a greater degree of choice, closed protocol systems are much more insular. Customers can only install components from the same company who have provided the overall system due to compatibility issues.

Customers can only use engineers from that company when repairing or upgrading their fire system.

Manufacturers claim that one of the main benefits of utilising a closed protocol system is harmony, as all of the components have been manufactured by the same company they are designed to work together successfully. Another benefit to utilising this system is that customers can often receive a discount on their initial quotation.

Customers are forced to use the same company when they require spare parts or repairs. And with no competitors forcing prices down, these services tend to be expensive, and parts can even become discontinued if the manufacturer decides to do so.

Customers are unable to choose from a wide range of equipment and therefore they may not be using the most suitable components for their circumstances.

Lastly, within closed systems upgrades are made when and if the manufacturer chooses to make them. 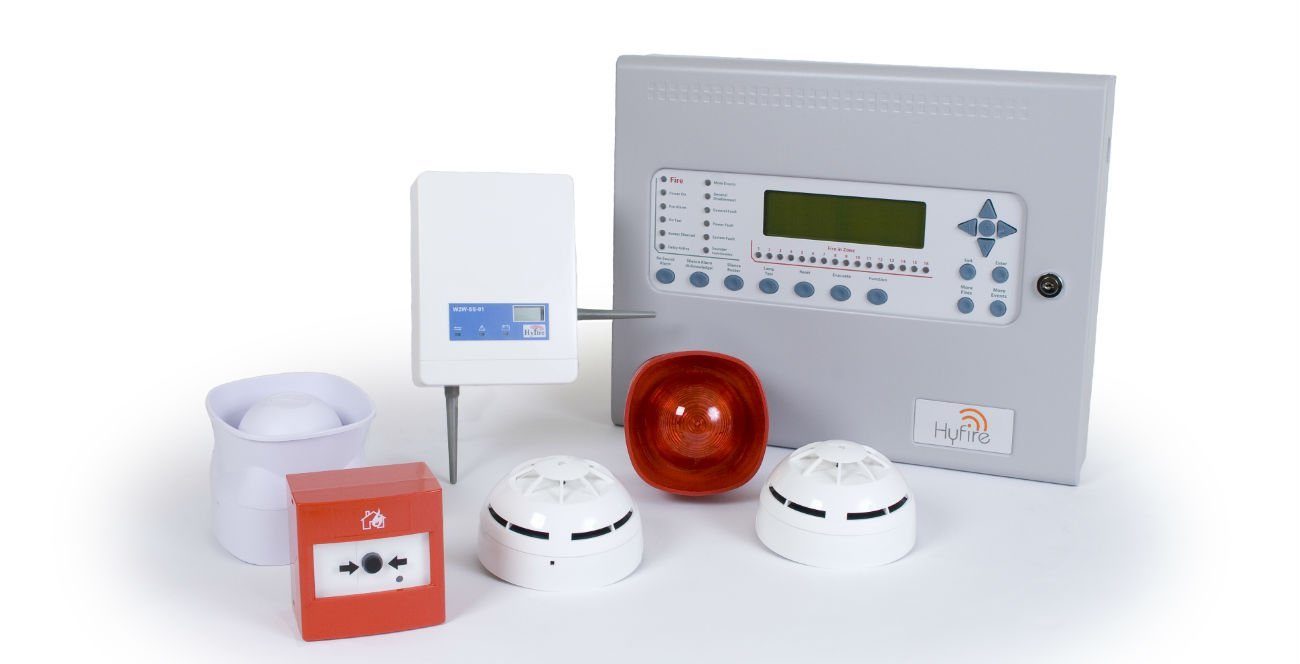 Any interruption to the running of your business can be costly and disruptive so the less time it takes to install your fire alarm system, the better. Particularly, where limited open periods occur, such as in schools during the holidays, or factories during shutdown, time is of the essence.

As the name implies, wireless fire alarm systems require no cabling to devices so the expense of fire rated cable is negated and the time & effort needed to run cable throughout your building is eliminated. When installing we simply need to position and fix wireless fire alarm devices – like detectors, manual call points, sounders and beacons – at the desired locations and you’re ready to go.

Installation can even be managed in stages so that only certain departments are closed at any one time. The system can then be connected wirelessly when all units are in place.

As long as wireless fire safety devices are positioned within unobstructed distance of the wireless modules that receive their signals, you can fix them almost anywhere. Most commonly where it would be impractical or unsightly to run cables or even between close-proximity buildings.

If your needs change, wireless devices can simply be repositioned elsewhere with minimal hassle – you can even re-work the entire system to a brand new layout if you need to.

A new fire alarm system is a big investment for any organisation to make so the possibility of keeping this system – one which you will have researched at length and paid good money for – with you if circumstances change will be a big factor in your choice.

As we’ve already mentioned, wireless fire alarm systems require no cables and can be re-positioned endlessly. So, if you find that you are going to move to new premises or perhaps you are using a temporary or leased building, you can easily take your wireless fire safety system with you when or if you move and adapt it to meet your new

So, there’s no need for pricey fire rated cable with a wireless system, but what else makes it a cost-effective choice?

Aside from the fact that most devices on a wireless system run on low-cost lithium batteries, mainly that you can easily add to your system if and when you need to quickly and with no disruption to your existing arrangement.

New wireless devices are readily connectable to your wireless receivers and configured to work in your system with the push of a few buttons.

Existing wired conventional or analogue addressable fire detection & alarm systems can also be added to with wireless translator modules and a new network of wireless devices to make a complete hybrid system. 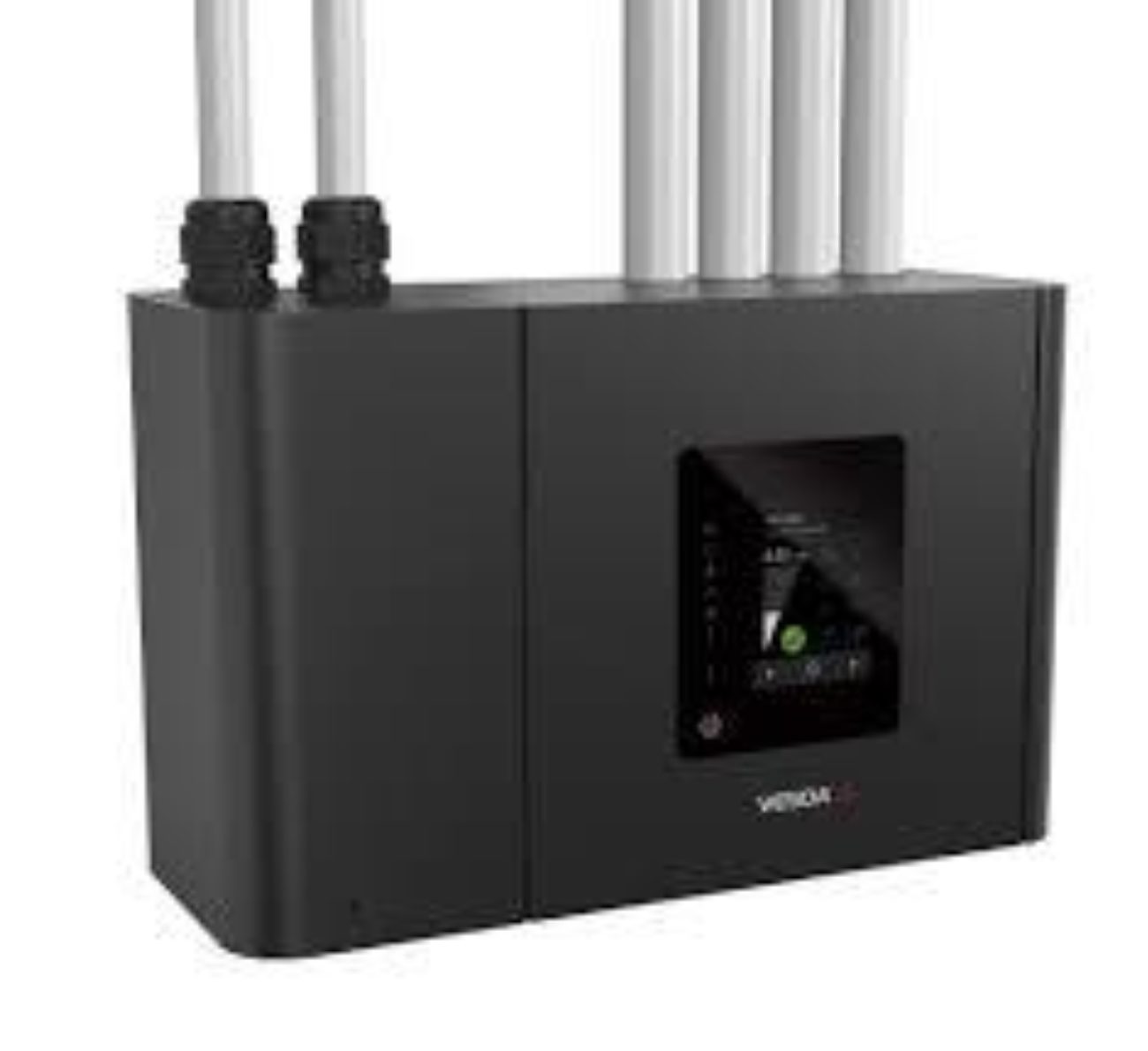 The protected area is fitted with a smoke sampling pipe or capillary tubing. The sampling pipe network, which collects air through sampling holes then transports it from the protected space to the detector, where it’s tested for the presence of smoke particulates.

The sampling pipe network is connected to a port on the top or bottom of the detector. It’s typically constructed of plastic, but can be made of copper, brass, or another non-ferrous metal. Individual manufacturers have specific requirements for sampling pipes. The type of pipe is determined by the specific application and specified in the design software.

As pipework and capillary tubing can be hidden, aspirating systems are ideal for use in heritage or listed building fire protection. 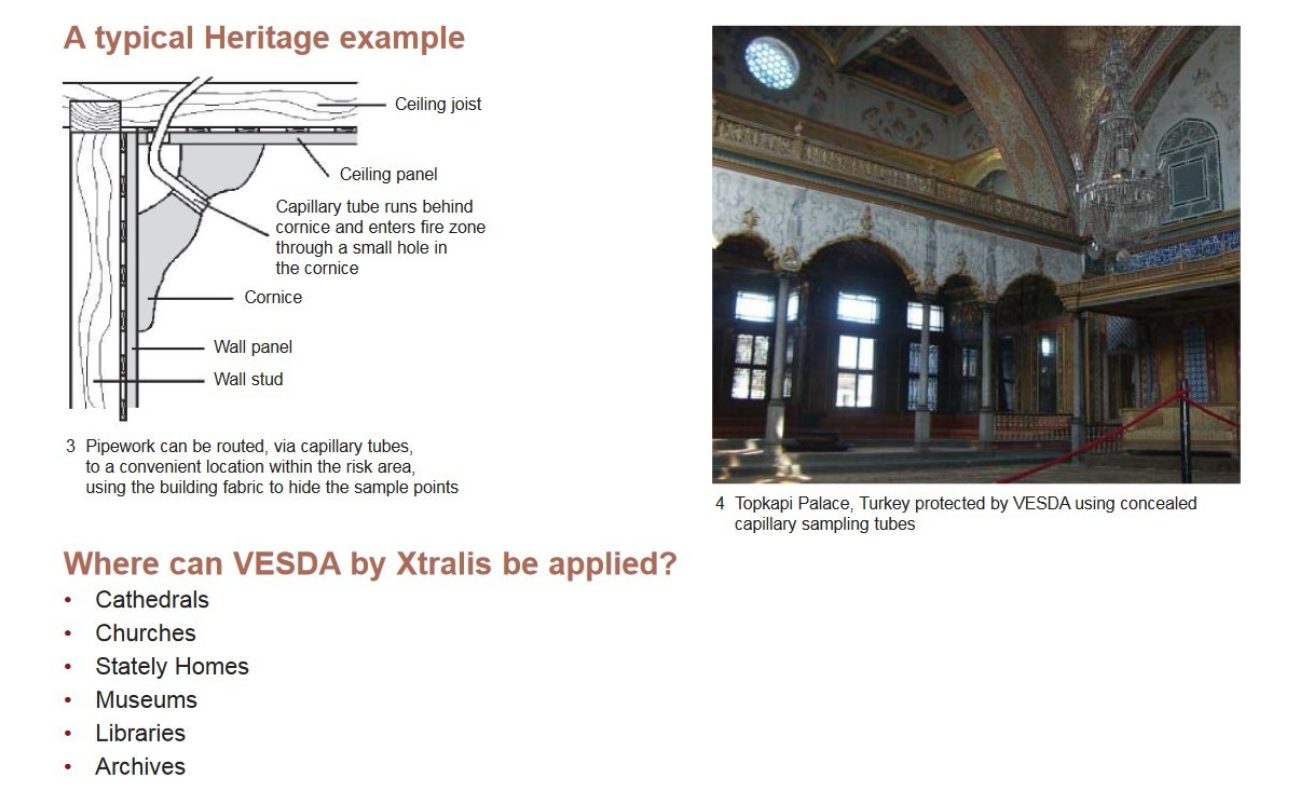 Aspirating Smoke Detection Systems are the most sensitive form of smoke detection on the market. It is designed to give very early indication of an emerging fire condition. This pre-emptive warning provides the time necessary to take corrective action and avoid the danger that a fire can cause.

Due to the flexibility of HSSD systems, they are installed in many different types of environments ranging from Data Centres, Heritage buildings, Freezer Storage and High Bay warehousing. 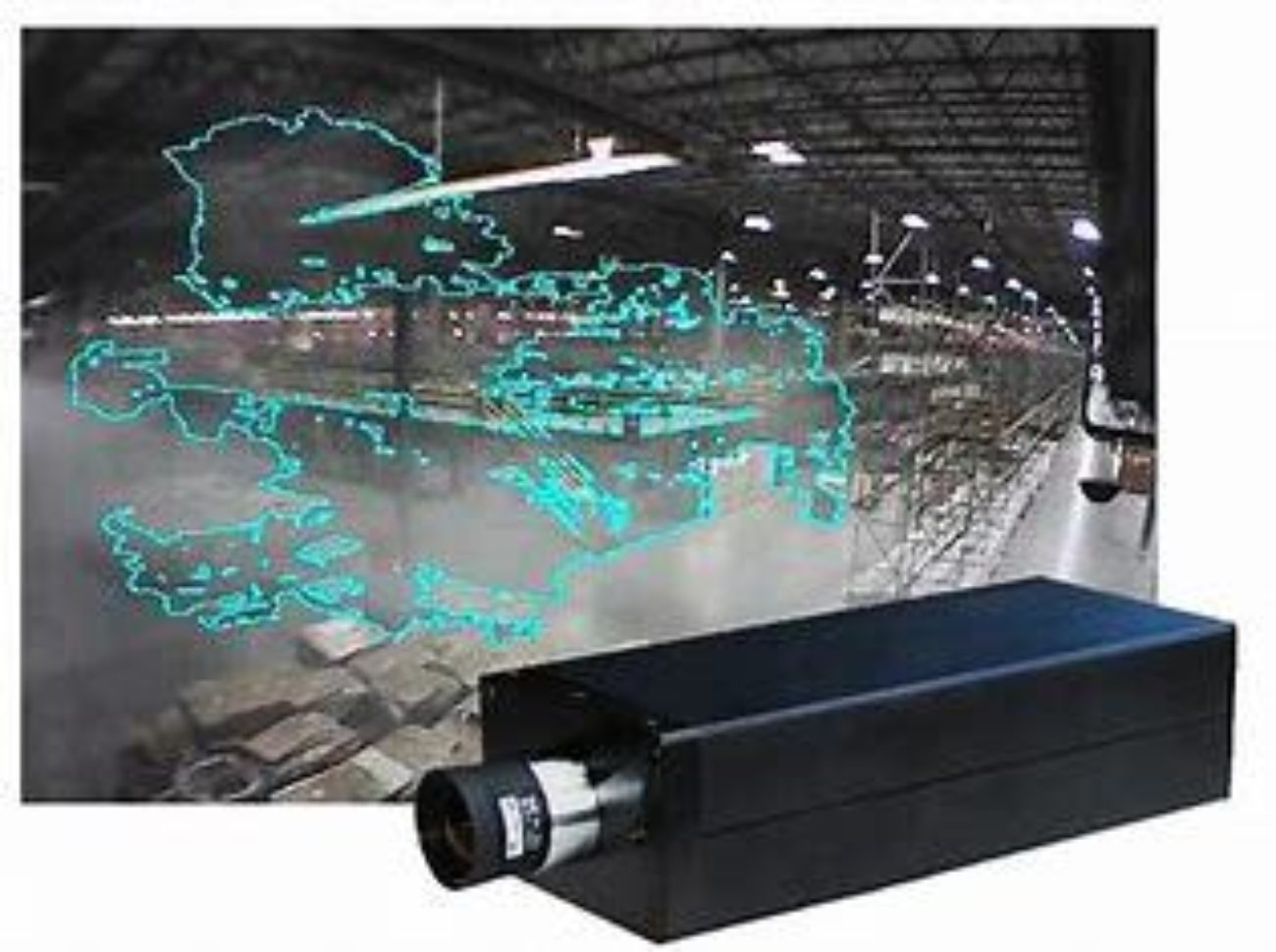 Due to the inherent nature of their design, many of today's modern buildings, large structures and interior spaces are not adequately protected against smoke and fire. Features like vast open areas and high ceilings can make the use of traditional smoke and fire detection methods difficult.

Video Smoke Detection is a unique detection technology as it does not require physical interaction with the products of combustion or heat (energy) for detection or alarm.

Each camera can be configured with multiple alarm and/or exclusion zones within the field of view. These zones are set to either alarm on specific events (fire, smoke and motion) within the zone, or alarm events outside the zone. 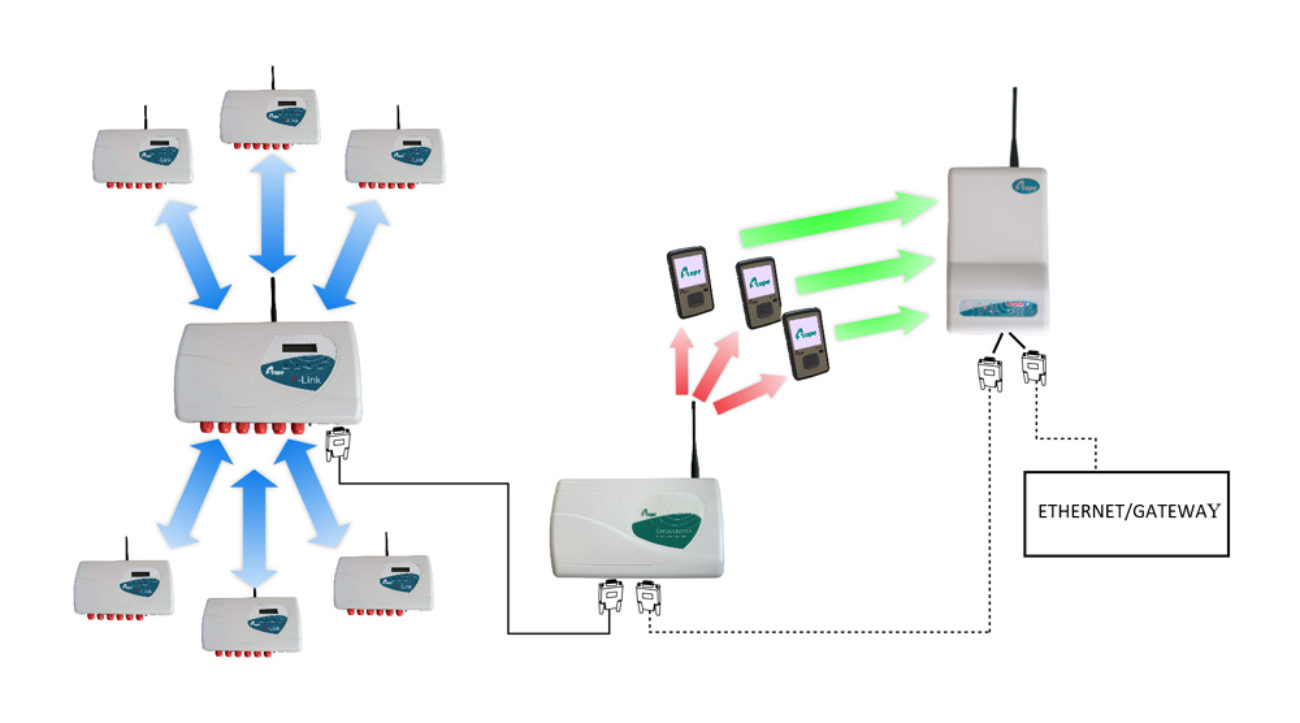 With large campuses or a sites with many buildings, radio paging systems offer a cost-effective solution of the management of your fire detection and alarm systems.

On sites where you are unable to cable fire alarm systems back to a central location such as security, (due to distance, cost or difficulty) radio paging systems allow you to seamlessly connect standalone systems throughout the property.

As with wireless fire alarm systems, radio paging systems can also include features such as Lockdown and Class Change functions for schools, colleges or universities as well as on site pagers and mobile text messages to selected mobile phones.

In summary, fire detection and alarm systems offer many advantages to organisations in need of fire protection today.

Whether you need a new Fire Alarm system or a Hypoxic Fire Prevention system installed at your commercial property, SolarFire Systems has you covered. We are known for our excellent customer service, our expertise, and our reliability. For more information on how we can help your business give us a call at 01628 902107.

We are BAFE SP203-1 installers for fire alarms and are NSI Silver status accredited. We are also BAFE – SP203-3 approved for fire suppression systems.

Back to news
I'm done reading, take me home